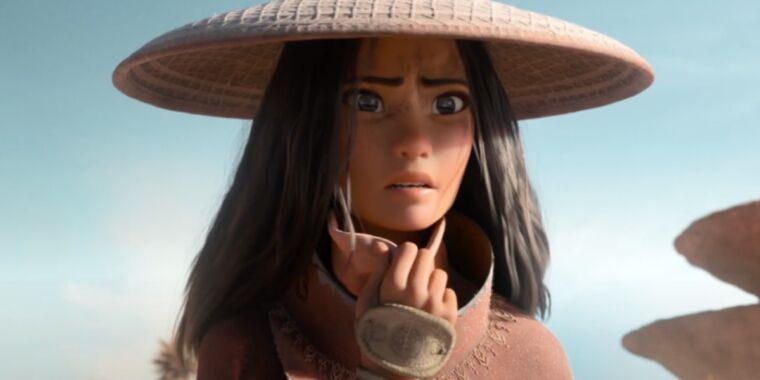 Disney has released the official trailer for its upcoming animated film, Stripe and the last dragon, with Kelly Marie Tran and Awkwafina voiced by the titular characters. It has the distinction of being Disney’s first animated feature film to be developed remotely in response to the COVID-19 pandemic, working with home equipment and communicating primarily through Zoom. The pandemic also caused the film’s release date to be changed several times. It is now scheduled to release on March 5, in both theaters and Disney + with first-class access.

According to the official synopsis:

Stripe and the last dragon takes us on an exciting epic journey into the fantastic world of Kumandra, where humans and dragons lived together in harmony. But when an evil force threatened the earth, the dragons sacrificed themselves to save humanity. Now, 500 years later, the same evil has returned and it is up to a lone warrior, Raya, to locate the legendary last dragon to restore the fractured land and its divided people. However, along the way, he will learn that it will take more than a dragon to save the world; it will also require trust and teamwork.

The trailer opens with Raya meeting Little Boy, seemingly abandoned in an alley, only to discover that the little scam artist has some formidable skills in martial arts and acrobatics. Recruit the whole thing for your quest to find the last dragon, along with Tong and Boun. But they are not the only ones looking for Sisu and when Raya finally finds her, Namaari and her followers are on the lookout. “You and the dragon come with me,” Namaari declares, but Raya doesn’t have it. “My sword here says we’re not.” We can probably expect an epic showdown between these two at the end of the film.

Stripe and the last dragon opens March 5, 2021, simultaneously in theaters and at Disney + (with main access) due to the ongoing COVID-19 pandemic.