AMLO: The myth of Simón Bolívar in the political history of López Obrador 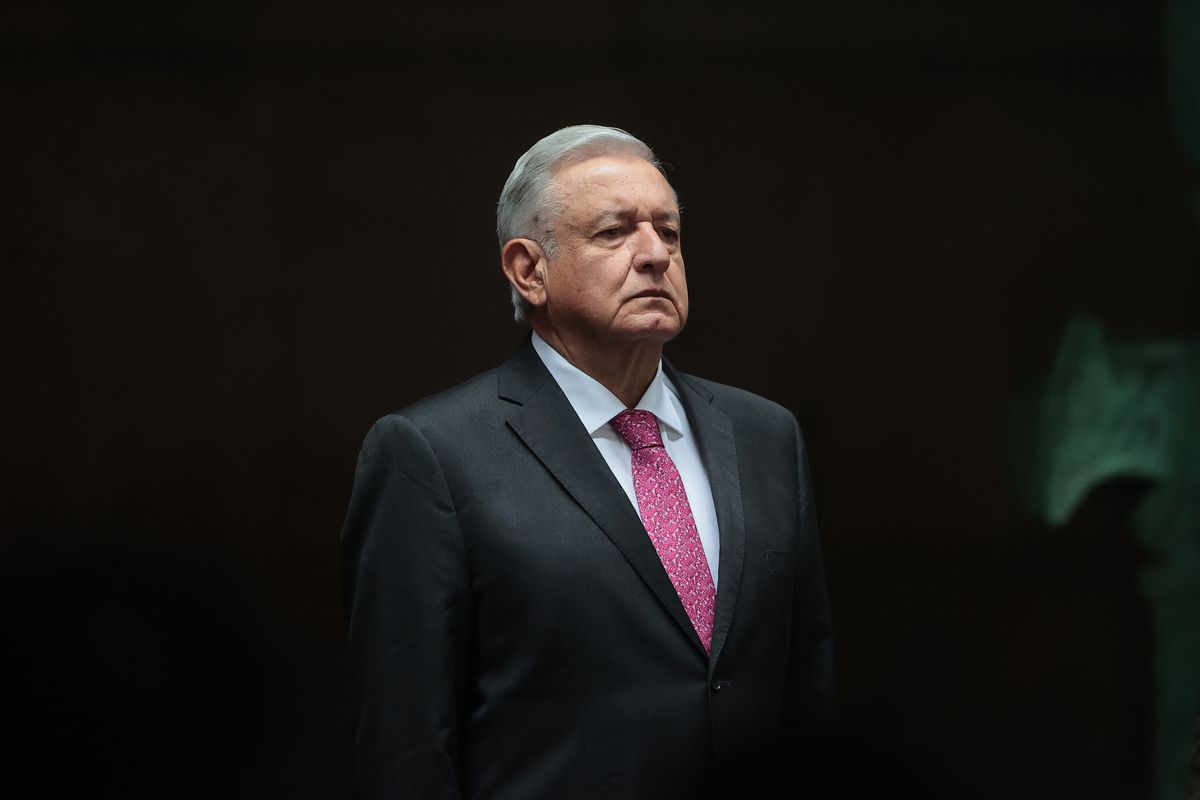 This Saturday, Andrés Manuel López Obrador will preside over an event to commemorate the birth of a historical Caracas man who is usually associated, politically, with Hugo Chávez: Simón Bolívar. But it does so not really to support the Bolivarian project in Venezuela, but to raise a flag of commitment to a South America that has seen Mexico more allied to the United States than south of the border. “Why on the bicentennial of Mexico is celebrated someone who is not Mexican?” said Chancellor Marcelo Ebrard in a short speech days earlier. “For the very important contribution of an essential idea that summons us: the awareness that we are a Latin American and Caribbean nation.”

Bolivar, who would have liberated from what are now Venezuela, Colombia, Ecuador, Peru, Panama and Bolivia, will be held at a 15 special events he organized presidency this year to commemorate 200 years since Mexico’s independence and 500 since the fall of Tenochtitlan before the Spaniards. At each event an international figure is invited to give a speech, such as the presidents of Argentina, Bolivia or Guatemala. Inviting Nicolás Maduro, however, was perhaps risky. The special guest will be the Chilean writer Isabel Allende, as explained by the Presidency of Mexico in El País, exiled in Venezuela during the dictatorship of Pinochet and his uncle, Salvador Allende, also represents a Latin American symbol of the left. It will also be attended by 25 ministers from across the continent.

The event is a strange thing for several reasons. The first, because López Obrador has not quoted Bolívar more than a couple of times in his political life, unlike the figures he worships in dozens of speeches such as Benito Juárez and Francisco Madero. The second, because there is no round date this year to commemorate Bolivar’s birthday: he was born 238 years ago, in 1783. And third, because Simon Bolivar -although he fought for the independence of New Granada at the same time as the independence of the New Spain was given – it had little to do with the independence process in Mexico. But by joining the cult of Bolivar, the President of Mexico opens a new chapter in the political forms in which the figure of the liberator has been used.

The Bolivar of Mexico

Avila explains that Bolivar had no further contact with the great heroes of Mexican independence such as Miguel Hidalgo and José María Morelos. After both were assassinated and the authoritarian Agustín de Iturbide managed to come to power in 1821, contacts between the Venezuelan and Mexican leaders remained scarce. “They were very different political projects,” Ávila says. “The Bolivar of 1821 was very republican and disliked Iturbide’s imperial project.” Mexico at that time reached almost to what is now Costa Rica, and the territory from Bolivar to Panama. As neighbors, rather than allies, Bolivar feared that Iturbide’s imperialist project would threaten his territory.

Avila considers that there was a type of influence, very indirect, by the treaty of Armistice of Trujillo of 1820, that recognized Colombia like country in war against Spain. This was a basis for what later became the Treaty of Cordoba, which recognized the Mexican empire in 1821. Bolivar and Iturbide, with these agreements, were no longer rebels but leaders of states. But apart from these treaties, and very few Bolivarian friendships with Mexicans, there was no military support during the two wars.

Bolivar’s unifying project, moreover, did not include Mexico. The liberator did not consider that its territory known as the Greater Colombia should expand further north of the territories it already included: Venezuela, Colombia, Ecuador and Panama. His image as a leader who wants to unify all of Latin America in a single state, in this sense, is more myth than reality. Yes he tried to organize a military alliance with other nations in the face of the threat of a Spanish reconquest, but in both efforts failed. Each state continued to defend its territory on its side.

“The truth is that I think it’s falling into a cliché, what the president does,” says Ávila about the López Obrador event. “Indeed Bolivar had a project of military alliance to face the European powers, but not a project of Latin American unity. This is actually something that was later attributed to Bolivar, began to be forged this idea of ​​the Latin American unit essentially from Venezuela where, from always, there has been a cult to terrible Bolivar “.

The great cult of Bolivar

With Saturday’s event, López Obrador is about to get on a train that has already passed many politicians and writers reading Bolivar in the way that best fits his project. Hugo Chávez, for example, especially praised the leader’s version as a leader and a revolutionary military man. Karl Marx described him in 1858 as a despot more like Napoleon. Two very different faces of the same man from the left. But the cult of the figure of Bolivar, which precedes Chávez and Marx, is above all a Venezuelan cultural production that has been successfully watered by Latin America since the 19th century.

“Bolivarianism is almost endemic to Venezuelan political history,” says Socrates Ramirez, a researcher on Bolivar’s political uses in Venezuelan history and a doctoral student in history at UNAM. After Bolivar’s death, General José Antonio Paéz -who opposed the liberator when he was alive- repatriated his remains to Caracas and was the first to make him a symbol of unity to amend a moment of political crisis. A pantheon and a number of institutions were then built to glorify the liberator. Years later, the authoritarian government of Juan Vicente Gómez in the early twentieth century would transform Bolivar’s version into something more right-wing, such as an ultra-conservative Bolivar and “a source of inspiration to preserve certain political orders,” Ramirez explains.

At the same time, a side appeared, perhaps the best known among left-wing leaders, who read the liberator as the opposite: 1 anti-imperialist, antiianqui and anti-European, who wanted to subvert the order. “From this tradition he will drink [el partido venezolano] Democratic Action from its origins, also the Party of the Mexican Revolution of Mexico – later converted into the PRI -, certain traditions of the Cuban left before the revolution, and certain traditions of left in Latin America “, explains Ramirez. “There is not one Bolivar but a multi-Bolivar, in Venezuelan politics, and in Latin American politics.”

The multi-Bolivar exists because Simon Bolivar could be, depending on the historical moment that is looked at to him, all these people simultaneously: revolutionary and traditional; liberator and despot; anti-Spanish and pro-European. He was an admirer of Jean-Jacques Rousseau’s civic concepts, but he was also the one who ordered the massacre of thousands of natives who opposed him in 1822 in southern Colombia; he was the Caracas aristocrat in a family of slaveholders but also the one that promised to him to the president of Haiti to abolish the slavery; he was the one who defended republican ideas in his writings but was willing to massacre the political leaders who opposed him.

“In every national tradition in the Americas, including the United States, the way Bolivar is remembered is different and depends on the figures he is compared to,” History professor Robert T. Conn of the Wesleyan University and author of a recent book on the different political uses that have been made of the figure of the liberator, Beyond Bolivar in the Americas (Palgrave Macmillan, 2020).

In Colombia, for example, Bolivar was seen as a conservative when compared to General Santander, known as a liberal and man of law (in the second half of the twentieth century, he also became an icon of the FARC guerrillas or the M-19). In Venezuela he was a unifying symbol when he was compared to General Páez, a critic of the alliances of Greater Colombia. In the United States, in a 1921 speech, U.S. President Warren Harding compared him to George Washington to promote a Pan-American alliance (which years later would become the OAS). Also to implicitly defend the Monroe Doctrine that consolidated American power on the continent. “If we could consult Washington and Bolivar,” the then president of the United States said, “they would tell us to move forward with firm confidence that ours is the right path.”

“Bolivar is always going to circulate as a cultural figure, and it’s not so much worth seeing who’s right and who’s not about him, because what needs to be seen is the context of the moment,” Conn says. In the literary world something similar happened to political leaders, he explains, when the continent’s most important pens dedicated their letters to the Bolivar they preferred.

“There was a renewed interest in Mexico with the figure of Bolivar with José Vasconcelos,” he says of the author of The Cosmic Race who wrote a text in 1939 about the life of the liberator. “Vasconcelos wanted to produce his own version of Bolivar, and what he builds is a fascist version, like an authoritarian figure, like a Hispanic against the British, and representing a Latin American racial cultural essence that is Hispanic.” Allied with German National Socialism and critical of the English and American anti-Nazi axis, Vasconcelos made Bolivar 1 anti-British when in reality the liberator fought alongside the English and Irish during independence.

Pablo Neruda, the Chilean poet, compensates this fascist vision of Vasconcelos shortly after with A Song for Bolivar, An ode written in 1941 when Neruda was helping Spanish exiles in Mexico escaping Franco’s dictatorship. “Neruda presents Bolivar as a warrior fighting the fascists,” Conn explains. “From the dead of Spain comes this red hand that is the daughter of yours“Neruda tells Bolivar in the poem.

“There are many ways in which López Obrador can use the figure of Bolivar on Saturday,” Conn said of the event. “It could be Bolivar’s version as anti-imperialist, or Bolivar’s version criticizing the elites, or Bolivar’s as a unifier. But in any case it will be an easy speech, because the real fact is that most people in Mexico really don’t they know who Bolivar was. So the president can honestly say whatever he likes about Simon Bolivar. “

“We already have independence, General, now tell us what we do with it,” a citizen asks Bolivar in Gabriel Garcia Marquez’s famous novel, The General in his Labyrinth, Perhaps the most famous about the one he would have released. Rewriting a thousand times would answer the story, which has not ceased to try to discover who was really the liberator. In a Colombia now protesting against the government of Ivan Duque, for example, protesters gather almost daily at a monument where the statue of Bolivar was removed for safety. Below his surname was now drawn a less glorious adjective which accompanies it: oppressor.