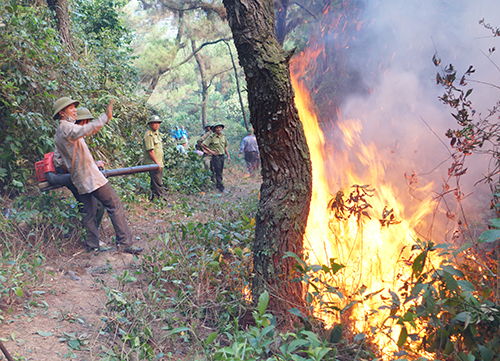 During almost three days of fire in the mountain of Hong Linh (Ha Tinh), more than 2,000 people, including police, forest guards and the army, woke up during the night of fighting against fires.

On the afternoon of June 30, forest fires in the commune of Xuan Hong and the city of Xuan An (Nghi Xuan district, Hong Linh mountain range) were basically controlled. However, a few hours later, the smallest fire burst again with the hot sun and the wind blowing sharply.

Hoang Quoc Huan, director of the forest protection department of Ha Tinh, said that the town has mobilized hundreds of people to continue fighting; In the afternoon of the same day, some forces withdrew to rest, the authorities organized many groups of soldiers, policemen, local people on the mountain to closely monitor the situation and prevent the fire from firing.

"This is a very complicated fire, the fire extinguishes after a few hours and then it is burned because there are many wooden trees in the mountains and a thick layer of vegetation. Over the last 3 days, more than 2,000 People including forest guards, police officers, soldiers The team, the youth union … have made great efforts to fight the fire, "said Huan. 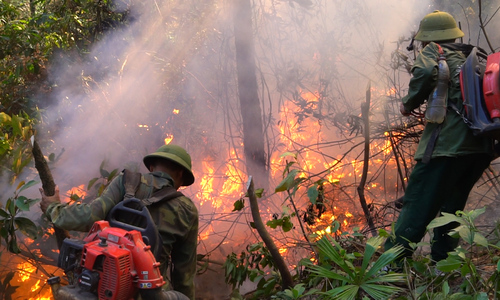 Video: the scenario of the forest fire on the Mount of Hong Linh.

At around 1:00 p.m., on June 28, smoke rises to the pine forest in the hills of Hong Linh, belonging to sub-area 92A, a commune of Xuan Hong (district of Nghi Xuan). The weather is hot, the southwestern wind strongly, causing the fire to propagate rapidly in the forest of the city of Xuan An. At 10:30 pm, the fire went out.

On June 29, the fire broke out twice, until noon on June 30 to be controlled. In order to serve the fire, the authorities prohibited the vehicle from passing the old 1A national highway through the city of Hong Linh, asking drivers to continue along the path of Hong Linh. Initial statistics contain more than 30 hectares of pine, acacia and eucalyptus forest.

"There is still a small fire in the natural forest of Lake Rao Tru, a commune of Ky Thuong (Ky Anh district), we are focusing on the control of the hand of the work," said the head of the provincial department of forest protection of Ha Tinh.

The same day, Deputy Prime Minister Vuong Dinh Hue and the head of the central organizing committee Pham Minh Chinh inspected the prevention and fight against forest fires in the districts of Nghi Xuan and Huong Son, respectively.

To Nghi Xuan, Deputy Prime Minister Vuong Dinh Hue said that, although the fire was initially controlled, functional forces were not subjective; Ha Tinh is still in the hot and hot summer days, the locality must cut regular forces, have a work hand and means to respond to developments in the field.

As for the forest fire on the Mount of Hong Linh, the Nghi Xuan District Police temporarily arrest Phan Dinh Thanh (46 years old, a resident of Village 7, a commune of Xuan Hong) to investigate behavior. Destroys the forest, according to article 189 of the Criminal Code of 2015.

Mr. Thanh declared, at noon on Sunday 28/6, that he came to the garden near the foot of Mount Hong Linh to collect the garbage and set it on fire. Due to the hot sun, the southwestern wind blows a strong fire in the protection zone of the 7th village of Xuan Hong and extended to the woods in the city of Xuan An. He urged people to remove the water to quench the fire, but failed.

From June 4 until now, central Vietnam has been continuously hot and sunny, with the focus of the provinces of Nghe An, Ha Tinh, Quang Binh …, the highest temperature of the popular 36-39 day, with more out of 40 places. This situation lasts until the end of June.