Ho Chi Minh City Vice President: “Many workers want to return to the city to work” 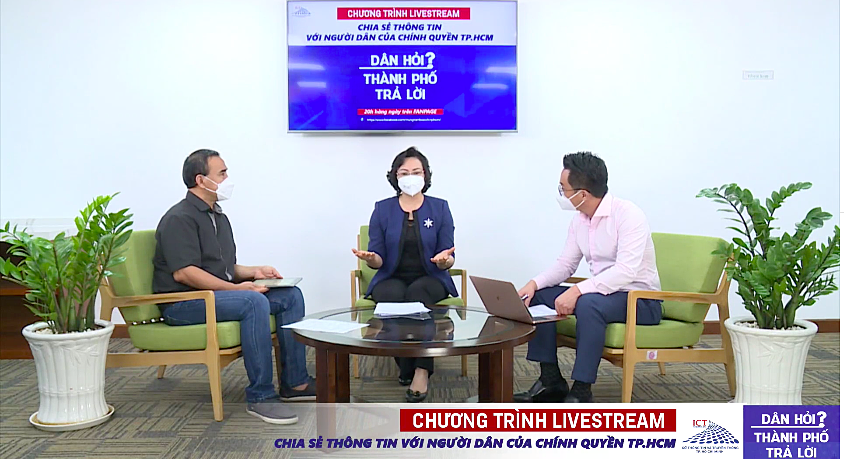 From early October until now, there have been days when the city of Ho Chi Minh registered the number of registered workers who wanted to return to the city to work more than the flow of people leaving.

This is the part of the vice chairman of the Ho Chi Minh City People’s Committee, Phan Thi Thang, during the live broadcast “People Ask: City Answers” on the evening of October 8th.

The information is gathered in the context that in the first days of October, many workers have left the city to return to their hometown, while companies have begun to resume production.

In the program, some companies also expressed concern about the difficult hiring situation. Ms. Thang said business associations and industrial parks are gathering a list of recruitment needs that are organized to welcome workers back to Ho Chi Minh City to work.

Previously, the city has proposed 3 ways to welcome workers, including: companies organize their own collections; the boards of directors of the industrial and export processing zones must coordinate with the transport units to collect them; and reorganize several fixed interprovincial passenger transportation routes.

In the immediate future in October, the first two options will be considered. Companies, associations and industrial parks that have a plan will have to send it to the focal point to make a summary to the Department of Transport for consideration and implementation.

For employees, to return to work in Ho Chi Minh City, they can contact the former company to participate in the collection program. For workers who want to go to Ho Chi Minh City to find a new job, they must learn to register in the locality.

“With vaccines, people who have not been vaccinated or who have just received a shot, the city’s policy is that if companies and associations receive workers again, depending on the specific conditions, priority will be given to providing vaccines. But export conditions turn out to have negative test results, ”Thang added.

In addition to labor shortages, companies reflect difficulties in financial capacity, disruption of the supply chain and the risk that the city will “close” if an outbreak occurs. Ms. Thang said the city of Ho Chi Minh has been and is about to receive more support.

Financial, recommends that companies know the support for debt rescheduling, debt freezing and the fact of not allowing the jump of debt groups, which are listed in circulars 01, 03 and 14 of the state bank.

With capital to restore production, the Social Policy Bank is running programs so that small and medium-sized businesses and cooperatives can ask for up to VND 2 billion per project and up to VND 100 million from people to create jobs. Poor, almost poor, newly escaped households can borrow up to VND 100 million, with an interest rate of 0.5% per month.

The city of Ho Chi Minh City has also submitted comments on the new government decree on the reduction of corporate income tax, VAT and the exemption of default interest that will occur in 2021 for those who suffer losses in 2020. In particular, there is a possibility that households and business individuals will be exempt from all taxes payable during the third and fourth quarters of 2021.

“The city has made a specific proposal, although it has not been approved, but it wants to be approved in the direction that all costs to combat the epidemic (such as testing costs and other protection supplies) are approved. .If it is recorded in expenses, it is very disadvantageous for people if it is recorded in profits, “Ms Thang said.

As for the supply chain and transportation, Ho Chi Minh City works with provinces and currently depends on the local epidemic situation. It is expected that on November 1 it will be able to reorganize some intercity bus routes if the epidemic situation progresses well.

The overload in the vehicle register reflected by the companies has also been resolved. The city will not temporarily penalize vehicles that have been slow to register, but will postpone the inspection and sanction deadline to the end of October.

Wholesale markets are also gradually reopening. Ms Thang said she would prioritize vaccines in wholesale markets to soon increase capacity to the inherent level. “Closure is possible, but we try not to let that happen,” he said.

In addition, the city of Ho Chi Minh is also calculating the gradual opening of tourism activities to “revitalize” this badly damaged industry. As for local domestic tourism, after piloting Can Gio and Cu Chi, the city plans to open more river tourism products, tourism in district 5.

From November, the city plans to connect with various localities to attract visitors. For example, he had preliminary talks with Ha Giang about the possibility that this province will receive visitors from Ho Chi Minh City in the future if they have had two injections and turned out negative before leaving.

“By the end of the year, we are thinking of sending customers in advance because those who come to our city are still scared,” Ms. Thang. In 2022, based on the epidemic situation, the city of Ho Chi Minh will have a proposal to welcome international visitors.