Mr. Phan Van Vinh: Nobody forced me to start a business 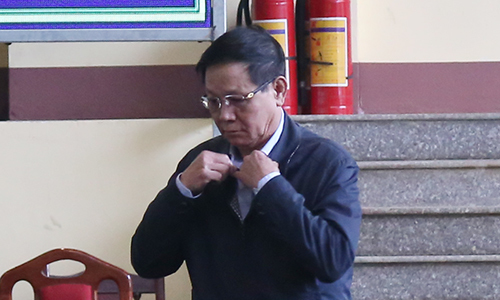 In the morning of November 20, the People's Court in Phu Tho Province is continuing to hear former police chief Phan Van Vinh with examined lawyers.

Lawyer Hoang Van Hung (defending former C50 head Nguien Thanh Hoa) asked Mr. Vinho: Yesterday he said that the Ministry of Public Security did not have procedures and procedures to lead the establishment of the company, but in the Ministry, the Unit founded a professional company. Before signing the CNC accreditation decision as a projection company, did you direct Mr. Nguyen Thanh Ho (Director C50) to study this facility in other units in the Ministry of Public Security?

Mr. Vinh said: "This issue is related to other professional agencies, I do not want to have fun because of confidentiality should not be answered."

Asked before signing "any threatening force", the former director Vinh said: "Individuals as well as police forces, no force or external forces force us not to sign."

Attorney Le Hong Khanh asked the question: Why did the Accused choose Nguyen Van Duong to set up a C50 company and not another? Mr. Vinh said that the deputy minister directed the establishment of a professional law office, and then the deputy met Yang with him.

On the role of C50, attorney Hoang Van Hung asked: orientation, advocacy or holding hands? Mr. Vinh said that this is also deeply deprived in the Ministry of Public Security, but because it is not necessary to provide a preliminary presentation. Consequently, when the department departments were as general manager, he focused only on orientation, this is not a concrete case to be handed over.

According to Mr. Vinha, a request for CNC report on May 27, 2016 by Deputy Minister Vang, he had a lead of 30 years very clearly that the C50 reported to submit it for approval. "There are times of forgetting in life, you should fall. In this life there is no life without things."

Lawyer Ksuanzang wants to again Mr. Vinh: After receiving the text of Deputy Minister on 27 May 2016, he has a pen no? Mr Vinh has confirmed that the pencil has approved the draft report by Nguyen Thanh Ho to submit his consent. Mr. Vinh admitted that his "forget" was not urgent to send the deputy minister.

Mr. Vinh said the leadership of the department, the professional leadership from the 63 provinces. The C50 compared to the General Department is only very small, so it did not have enough time to exchange frequently. Before many questions, Mr. Vinh asked the attorney carefully after an afternoon afternoon because time is not much for other things. The chair also informed the lawyer about the issues raised.

Mr. Vinh refused to speak of names, historical records in court, and his defense law last year raised information about the state of health. However, Mr. Vinh only confirmed and re-recorded the case file.

Answering the question "what's wrong" by lawyer Nguyen Minh Tham, he said "there is a new mistake to sit here to serve lawyers".

"At that time, as General Police Chief, what do you think of the state-run online games?" Attorney Phan Trung Hoai asked the question. Mr. Vinh said that the leadership for the prevention of crime, the management of social order makes everything quieter. Other areas of other agency responsibilities.

"When the CNC is established, is the business or economic factor at the center?" Phan Trung Hoai asked. Mr. Vinh said that in the fight against crime, joint efforts by forces sent to the Ministry of Public Security are highly respected. This is one of the voluntary contributions. The CNC accreditation decision is a professional company that clearly states the responsibilities of the C50, CNC. The responsible person for this decision is the C50 Director and the President of the CNC. Personally, Mr. Vinh values ​​quality based on professional performance.

After nearly two hours answering the question when he was sitting, Vuong Vinh ho Khan stood, a thick voice, trembling, took a cup of water in front of the drinks.