Relations between Vietnam and China are growing 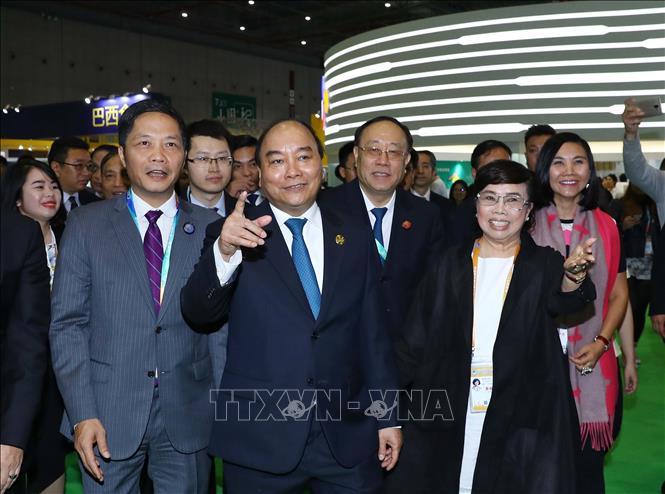 From 4 to 5 November 1818, at the invitation of the Secretary General, President of China Xi Jinping, Prime Minister Nguyen Ksuan Phuc had an urgent program of work with many activities as the opening ceremony. CIIE 2018 Fair and Hongkiao International Economic and Trade Forum; Visit country stands, commercial booths from Vietnamese companies.

The Prime Minister met with the Secretary General, President of China Xi Jinping, in the Shanghai Citi Dung market; dialogue, dialogue and reception of many leading companies in China; At the opening ceremony of the Vietnam Office for the Promotion of Hangzhou Trade, this is the second promotion office in Vietnam in China.

They speak in Opening of the CIIE 2018, the event for which Vietnam was elected "National Honor" At the first fair in more than 130 countries and territories, Prime Minister Nguyen Ksuan Phuc appreciated the organization of the fair, demonstrating a cooperative thinking about winning, mutual benefit, Promoting economic and trade cooperation and giving more impetus to the economic growth of the region and the world.

As a long-standing traditional friendship, Vietnam attaches great importance to the development of stable cooperative relations; The desire with China, the largest trading partner of Vietnam, promotes economy and trade for sustainable development, mutually beneficial.

Vietnam supports trade liberalization, fairness, transparency, coverage and is based on WTO rules as a basis.

The Government of Vietnam promises to create a favorable business environment that meets international standards and high standards in the next-generation free trade agreements in which Vietnam is participating. Foreign companies, especially Chinese, will more understand the Vietnamese product and development potentials and jointly promote trade cooperation, sustainability and shared benefits.

Conducts Vietnamese proverb "One tree should not be young, three trees should be high mountains" and Chinese idiom "Tree does not make a forest" Similarly, the prime minister stated: In the context of globalization today, the state can hardly develop independently, if it does not open integration, linking together to create "High mountain"the "Great Forest" development.

After the opening ceremony, Prime Minister Nguyen Ksuan Phuc visited the Pavilion Vietnam with the participation of 25 companies with good export capacity and prestige and quality of Vietnamese agricultural products. , processed food and information technology.

Within the fair, Vietnamese companies have held many meetings and exchanges with partners from China and other countries to look for opportunities for cooperation and investment in the future.

The Prime Minister confirmed that, based on the consistent application of the foreign policy of independence, autonomy, multilateralization and diversification, Vietnam attaches great importance to the development of friendly, stable, healthy and lasting relations. This is one of the main priorities of Vietnam's foreign policy.

Prime Minister Nguyen Ksuan Phuc proposed that the two parties maintain high-level visits and contacts, increase political confidence; CIIE 2018 will open up new channels of cooperation and distribution, focusing on promoting key trade and brand building in order to expand more and more Vietnamese products and goods. It is not only in the provinces of the southern border, but also in the northeastern provinces of China.

He called on China to open its doors and create conditions for the Vietnamese goods to enter China; Adopt policies and practical measures to reduce the current large trade deficit in Vietnam, aimed at bilateral trade in stable and sustainable growth; Highly-welcoming Chinese high-tech enterprises to invest in Vietnam.

In relation to South China, Prime Minister Nguyen Ksuan Phuc welcomed the positive results of negotiating and cooperation mechanisms in the less vulnerable at sea between the two countries, as well as initial progress in real negotiations. Code of Conduct in South China (COC) between ASEAN and China.

At the same time, it is proposed that both sides respect the legitimate interests of each other; seriously enforce the common perception of the high-level leaders of the two countries ", an agreement on the basic principles of addressing the resolution of problems in Vietnam and China; the settlement of disputes by peaceful means, in accordance with international law, the United Nations Convention on the Law of the Sea of ​​1982, maintains peace and stability in South China and the region.

At the meeting, the secretary general of the Chinese Communist Party and President Xi Jinping stressed that the Party and the State of China attributed the importance of relations with Vietnam and agreed to maintain a high level of contact with Vietnam. promote the areas of cooperation and maintain peace and stability at sea, creating a favorable environment for the relations of the two countries.

Secretary General Xi Jinping said China will not continue to trade surpluses with Vietnam and increase imports from Vietnam, so that the two countries' trading will develop in a balanced and sustainable way.

Over time, China has taken many steps to expand imports from Vietnam and has gradually reduced its trade deficit to Vietnam.

Last year Vietnam's exports to China increased by 36.8%, and China will continue to promote this trend in the coming period.

On the sidelines of the Fair, the Prime Minister met with the Pakistani President, Hong Kong's Special Economic Zone, Cariem Lama, to promote bilateral economic co-operation.

In Shanghai, the largest Chinese economic development center, the prime minister and the Vietnamese delegation met with many senior leaders of the big corporations and the "elites" of the economy. and promote cooperation in the fields of agriculture, finance, insurance, banking, construction, transport, energy and distribution.

The prime minister stressed the desire of Chinese companies to further expand their imports into high-quality agricultural products and seafood products from Vietnam to the Chinese market, with the aim of balancing the bilateral trade balance. and we hope that business partners will work together to win two victories.

The Prime Minister has set the heads of ministries and branches to get proposals from businesses and work on specific issues, implement investment and business ideas, especially in the production and processing of high-quality agricultural products.

On this occasion, the Minister of Agriculture and Rural Development Nguyen Ksuan Cuong held talks with Chinese companies specializing in agricultural products, seafood and fruits. Both sides promote the import of 20,000 tons of shrimp.

Signing a Memorandum of Understanding with Shanghai Fruit Import Group, from 2018 to 2020, can introduce 120,000 tons of vegetables and fruits every year.

Chinese corporations appreciate the overall achievement of socio-economic development, opening integration with Vietnam; At the same time, we confirm that we will continue to invest and expand our production and business activities in Vietnam. He expressed hope that the government, prime minister and interested Vietnamese agencies will be interested in creating favorable conditions for participation in major projects in Vietnam.

Prime Minister Nguyen Ksuan Phuc expressed his sincere gratitude to the CIIE 2018 for attaching importance to developing stable and healthy relations with China in order to promote economic and trade cooperation in a sustainable manner. Encourage ministries, affiliates and sites and enterprises of the two countries to strengthen co-operation in a spirit of mutual benefit; Mutual support for the organization of major events in each country.