Save the lives of teens with broken heart aorta 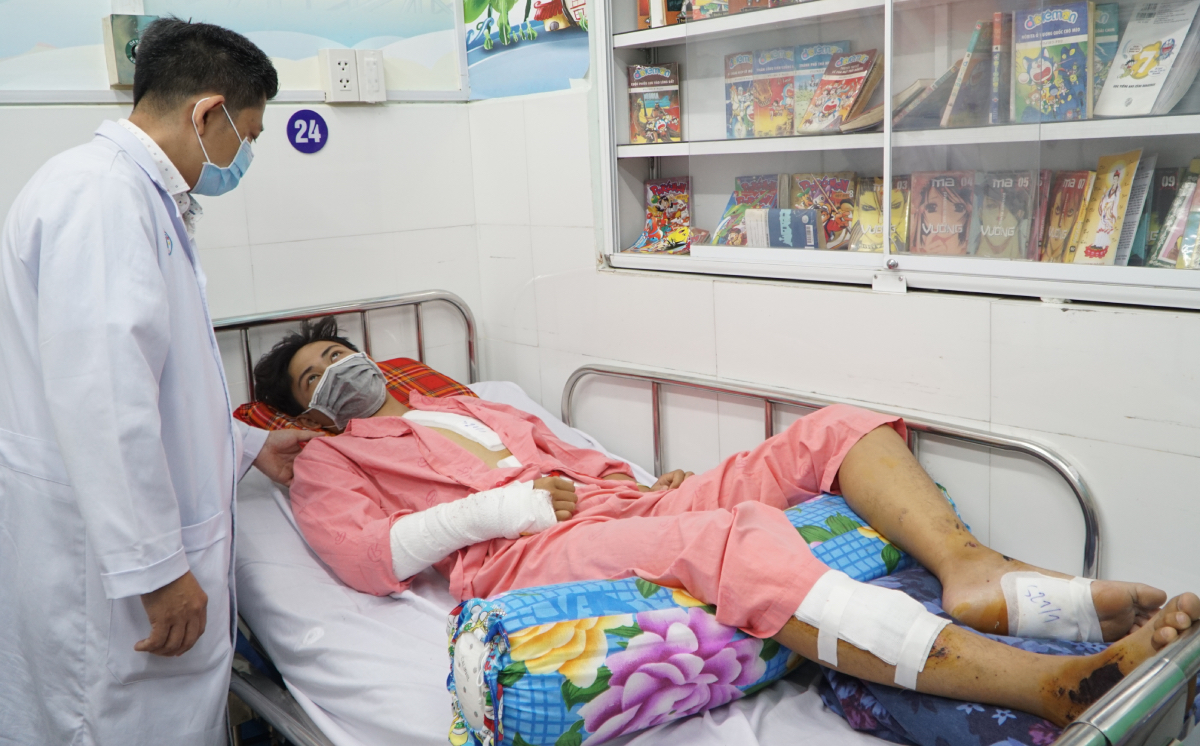 HCMCTran Nhat Tan, 14, in Lam Dong, had a car accident when he was on his way to school, his body had no injuries, but his right arm was broken and both legs were scratched.

When he gave first aid, Tan’s condition gradually deteriorated, the doctor at Bao Loc Hospital suspected that the patient had a serious injury and was taken to Cho Ray Hospital, Ho Chi Minh City. , the night of January 8th.

Dr. Le Thanh Khanh Van, head of the rehabilitation department – pediatric heart surgery at Cho Ray Hospital, said the patient was admitted at the seventh hour after the accident. At that moment, I was absent, not awake, calling and asking, I couldn’t answer, I just opened my eyes. Blood pressure index fluctuates continuously, signs of life are not stable. The pulse in the patient’s arms is clear, but the thighs are fins and weak. Doctors diagnose the patient with a closed, bleeding abdominal injury.

Computed tomography results showed a complete rupture of the aortic waist, a very rare and severe acute injury. This is the boundary line between the aorta up and down. The abdominal artery ruptures, causing the blood supply to the organs and limbs to almost cut off. About 700-800 ml of blood flows to the left pleural sinus, causing high blood pressure. If the bleeding is greater, it breaks the sinuses, the blood overflows into the abdomen and the patient cannot avoid sudden death. In addition, the patient’s small intestine was also broken.

“It’s a miracle for patients to live with these injuries,” Dr. Are going.

Fifteen doctors immediately performed a two-stroke, more than 14-hour emergency operation to save the patient. Cardiac surgeon in previous surgery, stops the additional bleeding by rupture and regenerates the aorta, resolving the risk of sudden death. Doctors must use an external circulatory machine (ECMO), which works to replace the heart to pump blood to feed the brain and organs, while actively reducing the patient’s temperature to 22 degrees Celsius, extending the time of surgery. . technique. In eight hours, the one-cm fragment of the broken artery was reconstructed using an artificial artery. After the patient escaped the risk of sudden death, the general surgeon sutured the broken small intestine, blocking other bleeding points.

The patient received a compensatory transfusion of more than four liters of blood during surgery. After surgery, doctors closely monitor the progress of the disease. Fortunately, the patient is physically well, 1.77 m tall, weighs 64 kg and recovers quickly. The two wounds divide the sternum and abdomen without infection or infection. If the patient follows the doctor’s instructions, next time does not cause additional damage, the artificial aortic waist can work well for the rest of life.

On January 21, Tan ate, walked alone, and exercised lightly. Wait, I need a few more weeks off, I can go back to school.

Dr. Van pointed out that after a car accident, a work accident … the victim may not show signs of skin damage, but if he has to carry muscle pain, lethargy, low blood pressure. .. the nearest medical department for prompt inspection and treatment. In the case of a Tan-like chest injury, including an adult, about 80% died before going to the hospital. There were cases that were saved, the complications and consequences were also devastating.

After half a month of service to care for his brother at Cho Ray Hospital, the patient’s brother, 19-year-old Tran Nhat Quang, was not completely surprised: “I didn’t expect him to almost lose his life.”