Secretary General of the National Assembly: "Police Thoughts Are Not Accurate" 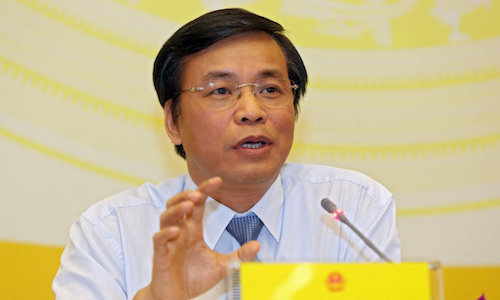 In the morning of November 20, at a press conference after the close of the sixth session of the KSIV of the National Assembly, the journalist raised the question of the comments of the deputy People's Petition leader Liu Pyongyi, which refers to the industry. "A terrible violation of an investigative agency."

Secretary General of the National Assembly Nguyen Huu Phuc replies: "I follow the comments made by the deputy Liu Pyongjang inaccurate, because the number of open letters of all organs is 87, in particular, the police sector is 82, so the division 82 is 87 high, but in reality must be divided into more than 120,000. "

Earlier, when he questioned the secretary of public security at a meeting on October 31, he reflected: "The investigator's violation is very terrible, there is no decriminalization of the charge of 94%, so the decision was postponed to the procuratorate 86%, the processing of cancellation 99.76% , exceeding 100% of service … ". However, arguing against this reflection, the director of Nghe An Nguien Huu Cau said that in more than 142,000 filed petitions, there were 87 complaints and 82 cases of police. "Delegation to 82 sharing 87 to 94% is the wrong way," Cau said.

According to Nguyen Hanh Phuc, after the Central Party Committee sent a written message to the National Assembly's National Committee on the abovementioned content, the competent authority ordered the Petition Committee to hold a meeting between the units concerned. and a delegate to see how accurate the data is?

"After the meeting, both parties clarified," Liu said.

According to the words of the Secretary General of the National Assembly, In principle, the questions were asked by members of the Government, while the changes at the meeting on October 31 discussed two debates with each other; vSo, "when Nguyen Huu Cau argued with Liu Piongiang, the National Assembly president asked two delegates to exchange outside the meeting room."

"This is an important political event in our country, which people and voters value very much," she said.

At this session, the National Assembly adopted nine laws and commented on six other laws. The Congress also ratified the Comprehensive Partnership for Transnational Partnership (CPTPP), making Vietnam the seventh country that ratified the treaty.

After the speech of delegate Liu Pyongyang on October 31, the Ministry of Public Security announced, calculated for the 12 months of the National Assembly (from October 1, 2013 to September 30, 2013), the total news Crime, the Prosecutor's Office and the Prosecution resolved 104,767 ( the resolution rate has reached more than 87%).

According to the notification, in comparison with the general report, criminal charges were processed, violations of the g. The Kyojs occupy a very small percentage, in which news reports, convictions are not adjudicated in accordance with the regulations. The Investigation Agency is 82 / 118,731 (0.07%).