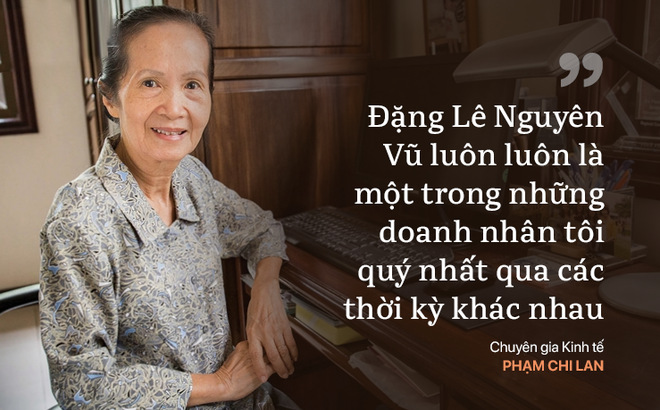 Vietnamese entrepreneurs in the eyes of the expert Pham Chi Lan

Truong Thu Huong: Speaking of Israel, according to her, agriculture in this country, which has raised hundreds of people in Vietnam, for many years, we still have a headache due to the problem of falling prices, Is the Chinese driver hurting the market? Is there any way that Vietnam can study Israel?

Mrs. Pham Chi Lan: I must say that Israel has many natural conditions tougher than us. In fact, despite many countries, I am especially impressed with this country because there are things I can not believe people can do, people in this country have been successful.

Speaking of agricultural development, Israelis are always humble to say that, because they have no other way, they have to try it, because living in the desert but needing to eat and drink should find ways to make agricultural products. They have to dig up to 1,000 meters to get water, take water and use it in the lives of people before refining it and put it in irrigation systems by drip plants. In Vietnam, is it because natural conditions are so rich that we do not think about the efficient and economical use of natural resources such as land, water, forest, the sea …?

The boom of this "start-up country" is also thanks to the leadership of the country with a very distant vision, a strong national spirit and autonomy. People have a deep patriotism, high self-sufficiency, a capacity for learning, great creativity and determination. When they intend to do something, they do it in a persistent way. For example, filtering seawater into fresh water, an idea that is crazy, but who are determined to do, believe and strive to succeed. Or, as they did in the mid-1950s in the context of a very poor country, nobody thought he could do it, but they did. 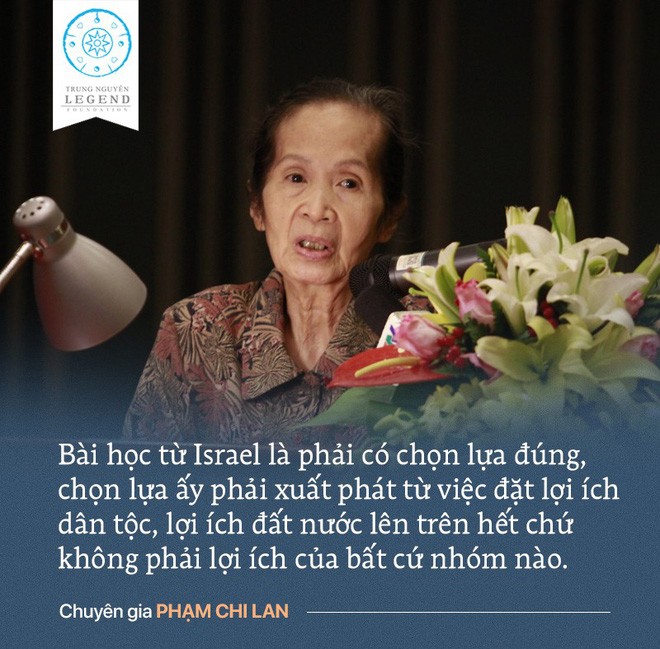 In agriculture, identify the products they need and can be invested, and then find and deploy technological solutions, think of how to organize production more efficiently. The effectiveness here includes meeting the needs of the market, products with high competitiveness, the best market and the greatest benefits for farmers. In execution, there must be the allocation and coordination between the State – Scientists – Farmers – Traders, with the roles and responsibilities of each party are very transparent.

Obviously, from the orientation and politics of the state to the scientific and technological inventions and applied, there is a smooth combination. The bold ideas and research of the people of this country have a very high applicability, most of them come from the real needs of life, not the research and then leave it. Policies are also specific, practical, sometimes given for each necessary, implemented and supervised case. Therefore, they rarely fail in politics, but when there are errors in the investigation, creativity is also explained and there is a way to solve or stop. It's worth to think and learn.

Another small example I would like to mention. When you go to Israel, a park or any street on the street, what you plant is not ornamental plants, flowers or weeds, but vegetables and fruits. It is a very practical way, which saves resources and protects the environment, but also helps to promote agriculture and a prosperous image of the country.

Truong Thu Huong: Ask the last question: the country spent 33 years of innovation and had the appearance of many good businessmen, created private companies with many trillions of VND and many millions of dollars VND. capital So, among the many talented people, which entrepreneurs make their grandmother really impressed?

Mrs. Pham Chi Lan: Actually 33 years is a very long process, then there are many new emerging faces. However, my impression and my personal feelings are still reserved for the first group of Vietnamese entrepreneurs. They have gone through so many difficulties, "crying and laughing towards floating water," but they still survive. I think they are like mirrors or people who pave the way for others to follow.

For me, Dang Le Nguyen Vu has always been one of the business people I have most through different periods, even if there is something I do not agree with. 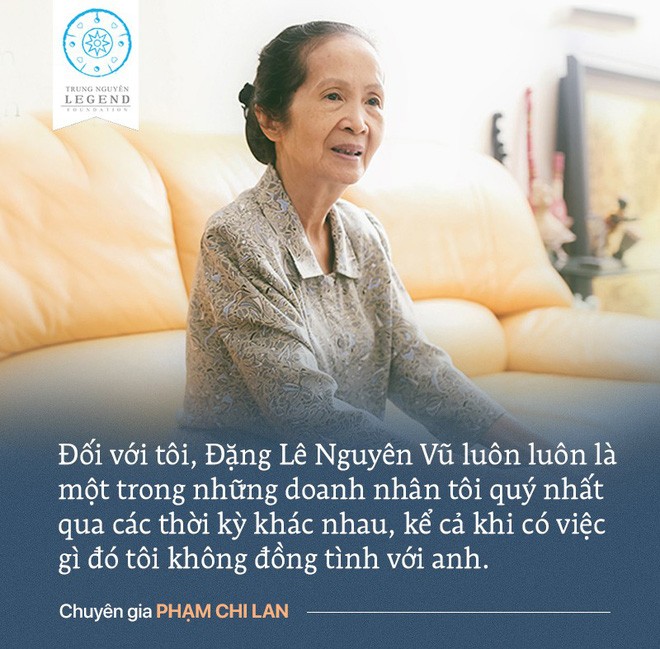 Later on, Vu encountered turbulent waves, I loved myself more and more because of the turbulence, but he continued to persevere in operating the boat he aspired to Trung Nguyen, who still shared his heart firmly with society, despite be socially "stoned". "but always faithful to the will to serve. It is a very precious spirit.

I also greatly appreciate Mr. Ly Ngoc Minh from Minh Long Porcelain Company. He is a person who has a very good heart for the country, with a young generation, who has the passion for relentless creativity to offer excellent products. He also contributed greatly to programs and social activities, invested in the "Golden Spoon" program, tens of billions each year to promote the development of Vietnamese cuisine. I also like the way it treats and treats family employees and children. He really is a very respected and respected person.

The first generation also included Mr. Vo Quoc Thang from Dong Tam Brick, Mr. Thai Tuan Chi from Thai Tuan Textile, Mr. Co. Gia Tho of Thien Long Ballpoint Pen, Mr. TruPong Gia Binh of FPT, Mr. Nguyen Lam Vien de Vinamit, Mr. Do Duy Thai Vietnamese steel, etc. … These are the people who are willing to overcome difficulties, be enthusiastic and creative in the business, dedicated and dedicated to activities for the community and society. They also stand out in the national spirit, self-reliance and a very high interest in sharing and supporting young entrepreneurs in the future.

To the business woman, I absolutely love the three sisters Ba: the stubborn Ba Thi of Saigon Food Company in the early days of the reform, Ba Suong, the heroin of the old Song Hau farm, to cheat. It has been unfair and today Mrs. Ba Huan of the famous Huan Owes Company. 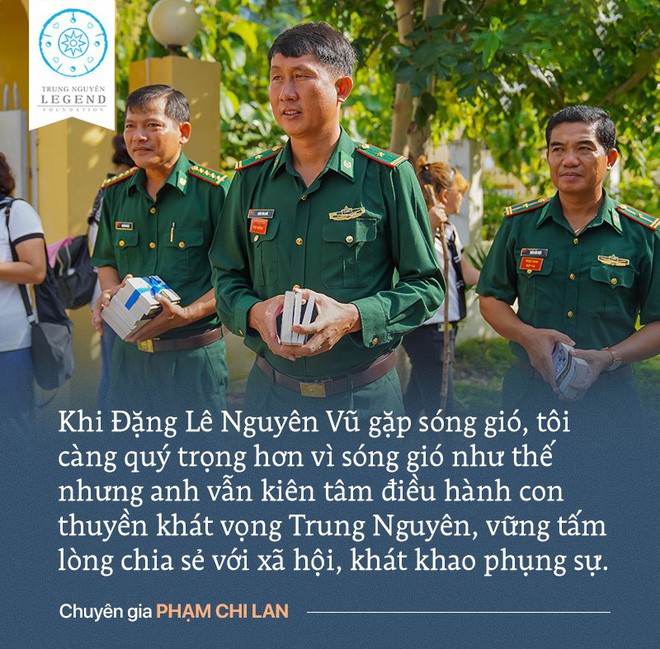 WHEN JOINT, NOTHING IS NOT! 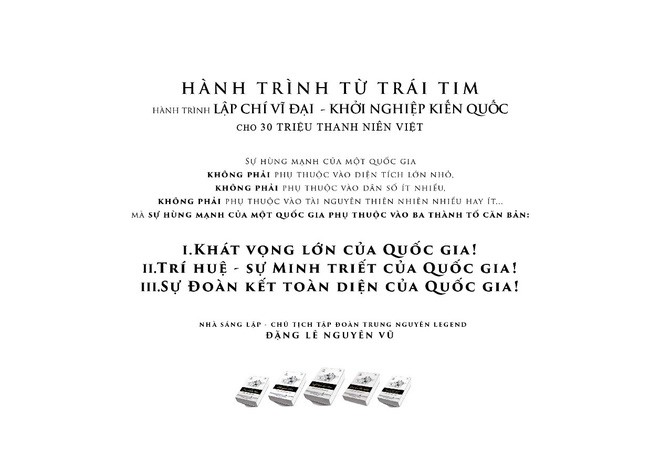 "Trip of the heart: travel of great presidency: beginning of the race of a nation for 30 million young Vietnamese", initiated by Trung Nguyen Legend Group for Build a great aspiration, a great direction for the Vietnamese generation of Thanh Nien; build wisdom and wisdom Comprehensive for 30 million Vietnamese young people by donating tens of millions of precious books to Vietnamese youth to have the right intellectual and integral intellectual, of which Transform yourself into mental strength, physical strength and physical strength, creating the power of the nation.

"Platform of modified platform books" consists of more than 100 titles of the title by the PRESIDENT of the legendary group Trung Nguyen DANG LE NGUYEN VU, which carefully collects millions of books of thousands of names of great names of great success of the humanity The library, imbued with dialectic thought, recirculating theory in practice, the unity par excellence of all humanity to help you learn completely and appropriately about the 12 most essential areas: science, philosophy, Huyen Hoc, Medicine, Martial Arts, Literature, Politics, Ethics, Social Studies, American Studies, Sound and Linguistics. In it, 5 books "Think Rich In Riches", "Study Animation", "National Startup", "Compassionate Mind", "Never Be Failure – All Just Challenge" are books the beginning of the "shelf life platform".

Number of books I was hoping to arrive More than 200 million examples, with The necessary cost is almost 5 billion dollars. Trung Nguyen Legend awaits and believes that Journey will receive srespond, converge, unite, spread, and be more organized, more widely throughout the country; together with the support of agencies, organizations, social organizations, companies, sponsors, influential figures, elites, the media … for one Big Chi, because of a great aspiration, to start a nation Not only for 30 million Vietnamese young people, but for all Vietnamese citizens and families. With limited resources in terms of human and material resources … though Trung Nguyen Legend Group will act with Tam Thien Lanh and the maximum responsibility.

Until now, "Travel from the heart – Travel to the great environment – The national career of 30 million Vietnamese young people" has been accompanied by the Ministry of Defense, Ministry of Education and Training, Ministry of Culture, Sports Sports and Tourism, Central Committee of the Union – Youth Union of Vietnam … with many state agencies, social organizations and national and international influences; with media agencies: One World, Thanh Nien, Soha, Tien Phong … The trip continues to organize programs of activities for students, students, military youth … in the university system, study, academy, school, institute; system of libraries and cultural houses … throughout the country and the remotest waters of the islands of the country.

Detailed information on Travel from the Heart – Great trip trip – Start of the national race for 30 million Vietnamese youngsters & # 39; is constantly updated at www.hanhtrinhlapchividai.com or https: //www.facebook. com / lapchividai

A million hearts in the same heart, due to the aspiration of a powerful Vietnam and a global influence on the world!